I have been planning a hunting trip for next week, and realized that I forgot to post about this year's bow hunting season!

This year's bow season ran from September 2nd to the 30th. I was unable to draw the deer license I wanted, but thankfully I was able to get an elk license. The season started and remained very slow. My father currently doesn't get any paid time off so I hunted solo for the first couple of days. The first morning and evening I just sat a spot I bagged a bull in a couple years ago. Saw nothing except squirrels and chipmunks, which was odd because I used to see deer every single day the last time I hunted this spot. I figured it was likely due to it being unusually warm this time of year. Due to the lack of seeing any game, and knowing I didn't see elk until late in the season last time in this spot, I decided to change my strategy. There is a road I used to drive on my way to work that borders private land, which I used to always see elk cross during all times of the year. I figured it was worth it to at least check that out in the morning just to see if the elk are still around. Plus the road is higher in altitude so I figured the elk would be there for the cooler temperatures.

The next morning I slept in a little because I knew the elk would normally cross the road a little after sunrise. Sure enough, I turn onto the road and literally about 200 yards later there is a bull elk getting ready to cross the road to go up the mountain. I check the map and see that he is crossing onto public land, and there is a trail I can hike up which should put me right in his path. I park the truck, grab my gear, and head off into the woods. The forest was very thick, but I found that the trail on my map is actually an old logging road. Stalking my way up this road, I wind up sneaking up on the same bull who had bedded down in the tress just below the trail. However, as I nock an arrow he hears me and boogies off into the timber. I was unable to find him again, but discovered that there is a network of game trails and I could hear elk around me calling each other. In hindsight, the "elk" I was hearing was likely other hunters, but more on that later. Figuring this was a good spot to hunt, I decided to at least hunt the weekend there. Once the morning was done, I headed out to go pick up my father who lives about thirty minutes away. After grabbing brunch with him and my mother, we pack up his stuff and head back out for the afternoon hunt. Hiking up the old logging road we find a heavily used game trail, and start hiking up it. Eventually we pop out at treeline, and stop to take a break. While standing there another hunter walks up to us, and we chat him up about the area. He confirmed that there are elk in the area, and that he and his friend would be leaving the next morning back home (he was from a different state). After parting ways, my father and I continue up the ridge/mountain seeing all kinds of elk sign. We wind up sitting the top and glassing one cow elk miles away on another mountain side which was on private land. Having no luck at the top we decide to hunt our way down the mountain back towards the truck timing it so that we'd be in the timber after sundown. Didn't see any game, but did find a whole bunch of sign which we suspected was from a few days or a week prior.

The next morning we headed back up to the top. We basically spent the entire day up there, having a mid-day nap before the afternoon hunt. Overall, we found that there were many hunters in the area along with a lot of people just out for day hikes. Therefore, after that first weekend we decided to hunt my original spot and there was one day where we checked out a completely differnt area closer to where my father lives. Most of the the season was spent sitting an open area I had shot a bull in a couple years prior, but during our time in there we only saw deer. One afternoon we decided to try a different spot nearby where we were sitting, and we wind up seeing a heard of elk. We tried sneaking in, but by the time we reached them they had just left.

The rest of the season was very boring with no luck. Tried calling, but the elk (at least in the unit I was hunting) never got into the rut so the only responses I received were from other hunters. I found the same heard we bumped into a couple weeks prior on the very last day of the season, near the top of the mountain. However, they were in a spot that was situated above and below very steep mountainsides, which were too dangerous to attempt going after them. I did mange to take some nice photos though. Thankfully we have another oppertunity to hunt coming up next week, so hopefully our luck will be better this time. 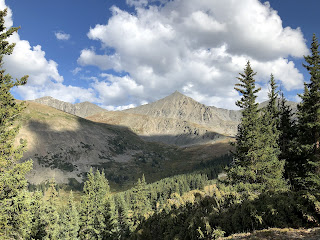 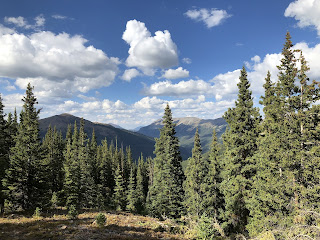 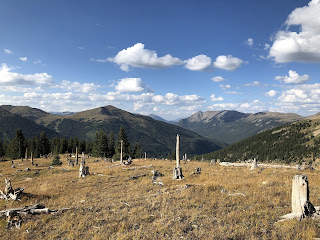 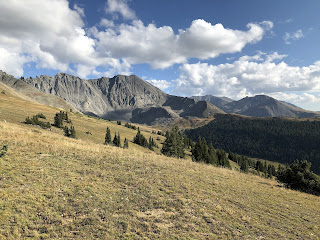 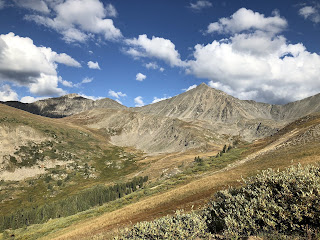 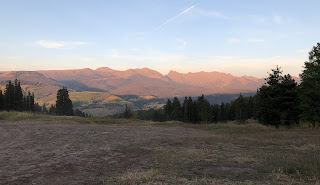