Candlestick charts are a method of viewing price action. I find them to be more informative than other types of charts such as line, and point and figure. If you're not familiar with how to read a candlestick chart, you can click here to read a post I did on the subject.

Today I will discuss reading star and hammer patterns in candlestick charts. Keep in mind these patterns can have various uses depending on if you use them standalone, or include other indicators. Typically they are used for indicating short term price movements.

I have seen the shooting star also referred to as an "evening star". The shooting star is formed during strong upward movements in price, forming a wick on both sides of the candle's body, and closing at or near where it opened at. A text book example also shows a gap up between the "star" and previous bar, but I apply the same principal even if the open on the "star" is the same as the close from the previous bar. This is mainly due to trading forex and crypto, which trade 24x7 so there is no ability for it to gap. 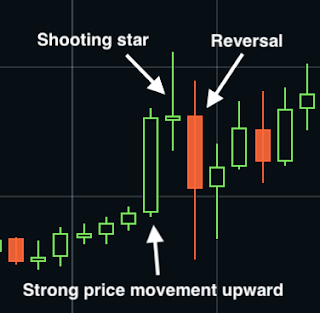 In the above screenshot you can see that price had a very strong movement upward. The next bar seemed to continue the momentum, but eventually the bears took over with the result being almost break-even by the time the bar closed. The following day resulted in a drop. Some people prefer to combine this with other indicators, and/or a more equal wick sizing on both the top and bottom so the bar looks more like a star. There are also personal preferences on how large the bar (or upward trend) was prior to the star forming. Overall this is a basic chart pattern which indicates a possible reversal in upward momentum.

The morning star is exactly the same as a shooting/evening star except the chart (price movement) is flipped. Price will have strong movement downward, then a star forms on the following bar. The exact same rules and various personal preferences which apply to shooting stars also apply to morning stars (additional indicators for confirmation, equal wick sizing, etc.).

The hammer pattern is very similar to a star pattern except that it only has a single wick, and has a small body so it looks like a hammer. 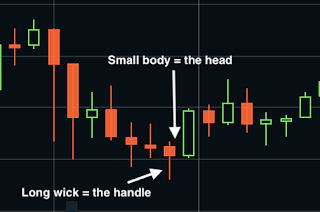 As you can see in the above example, the wick forms the handle, and the small candle body forms the head. Ideally there would be no wick on the other side. There is also what they call an "inverted hammer" which simply means the "handle" of the hammer is on top of the "head". Both can be used in either direction to signal price reversals. Overall this is a basic chart pattern which indicates a possible reversal in price. Just like the star patterns, the hammer has various personal preferences that vary from trader to trader. Be careful not to mistake a hammer for a dragonfly or gravestone, which will be covered in a future post.

Posted by StockHunter at 3:38 PM