My day today consisted mostly of reviewing my past trades. I looked back at my charts and noticed a few things. For one I’d say about 75% or more of my trades were late entries. This was due to me always waiting for a support or resistance break, which wouldn’t be bad if I were using breakouts during the proper times. I’ve also realized that my constant size adjusting was not good. By doing that I not only made some winners less and losers worse, but it would also put me in a scatterbrained mindset. A couple other things of note were I should manage my risk a little better, and keep myself mentally sharp. If I focus more on the type of market instead of where the next trade is I should do fine. The decision I have come to is trying my system once more, but with a different mindset and style. I will have the above issues resolved, and will be testing this over the coarse of the next month.

I managed to squeeze in a trade after I completed my above research. Using my new mindset and style proved to be profitable, now it’s just a matter of testing it out.

Totals for the day
Forex: (+2.05%) Paper-trades
All times on the charts are Mountain Standard Time

1 trade for a gain 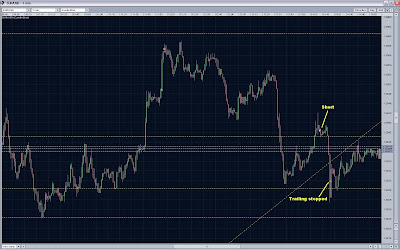 Posted by StockHunter at 7:48 PM