Sifting through the news today I came across a good article talking about a few topics (Click here to read it).

From the sounds of it the Aussies are the only ones in the world with a decent economy. According to the article their unemployment rate is holding “steady” at 5.1%, which is contributing to their currency doing well lately. I figure it’s got mostly to do with the fact they actually produce stuff (metals mostly), unlike the U.S. where we are a “service” economy.

With demand dropping for crude/gas hopefully we will begin to see some better prices at the pump. However, gas prices falling will likely be hindered by the dollar loosing value. My guess is the drop in demand is likely due to some seasonality, along with less people traveling because of the uncertainty in the job market.

On a side note I’ve made 1 trade (short gold) so far today, which was a gainer (chart will be posted later). Almost went in on EUR/USD on the 7:02amEST bar (see chart below), but with the G7/IMF meetings going on today I decided to keep my number of trades to a minimum. 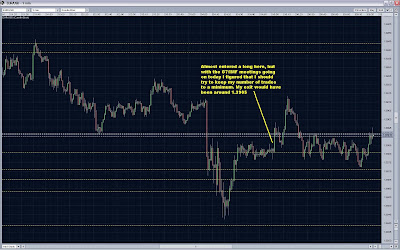 Posted by StockHunter at 6:23 AM