The 1st week of bow season

Well, I’m back from hunting this past week. We 1st packed into the area I’ve bow hunted for the past 2 years (3 if you count this one), and on the way we stopped to take a photo: 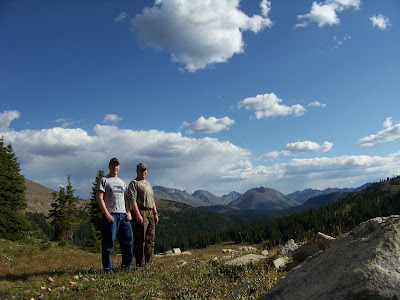 After we got done with our break we continued on the trail. Then once we were about a mile from where we were going to camp I looked down in the bottom of the valley and spotted a small herd of elk (I’d say they were about 1,000 yards away). They went across the field stopped for a drink and continued into the woods on the other side. We weren’t sure if they were going to stay in the bottom or continue up the other side, either way it was the day before the opening of the season so we kept going to our campsite. After we set up camp we went to get some water and while we were there we smelled some elk close by. So we went to check it out, and couldn’t find anything so we headed back to camp.

The next day we get up before sunrise and head to our hunting spot (about ¼-½ a mile from camp). Once we set up an owl flew in and started going for my dad’s face! It kept flying in, but would stop just before hitting my dad. After a few attempts the owl decided to fly off, likely because the sun was starting to rise. While we were standing there we could hear a bull bugling down below us. I tried calling him in, but it wasn’t working so we started down toward him. On the way down he let one last bugle out (which sounded close), but we didn’t hear from him again. So we stopped about ½ way down to the bottom and went back up to our original spot. Let out a couple of more calls and heard another bull bugle in the other valley (we were sitting on a “saddle” with valleys on either side), but he sounded way to far away so we just finished out the morning where we were and headed back to camp. While we were eating breakfast/lunch the weather started to look bad so we packed up camp and headed out. We decided to drive down to where the road dead-ends at the very end of the valley. Off of that road we have another spot in the woods where we ran into elk the year before so we hunted that for sundown. Nothing came out and once we got back to the car we decided to head back home because things just weren’t working out in that area. On the way home we realized how much work we put in last year (to the point that we are burnt out this year [at least for bow hunting]), so we decide to sleep in the next day. After we woke up we didn’t feel like hunting so we wound up taking the whole day off.

Monday (8-31-09) rolls around, and after sleeping in we head up to ski cooper for an afternoon hunt. Didn’t see or hear any elk (though there was a time when we could smell them), and only found a little bit of sign. The next day (Tuesday) we sleep in again, and decide to hunt a different area for the afternoon. We bushwhacked our way into a kind of wetland (it was a wet, open area with lots of bushes) and sat a spot where it looked like the elk had watered before. Nothing was happening so after about 2-3 hours we headed back to the car and finished the night with a road hunt.

Now it’s Wednesday (9-2-09), and we decide to hunt in yet another area we have found elk in. This time we wake up early for a morning hunt. Once we got to the parking lot I did some calling and got no replies, so we decided to head down to Breckenridge to hunt another spot. Managed to get in at a decent time, but could only find a few tracks and that weren’t very fresh. Then we headed home and decided to take the afternoon, and next day (Thursday) off.

Friday we went back into the same area as Tuesday to hunt the morning only this time we went all the way up to tree-line. Didn’t see anything and the sign all looked old so we figured the elk were gone. We also took some photos when we reached the top: 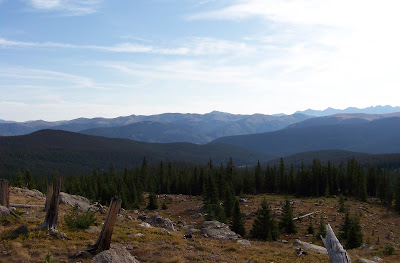 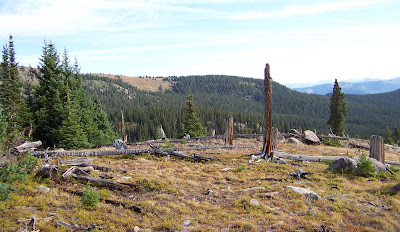 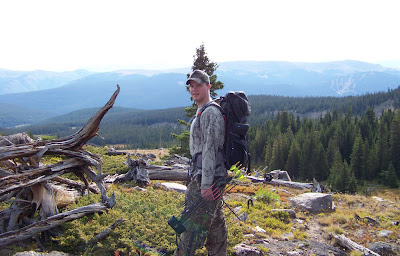 Overall the number 1 thing that I’ve learned this week is that I really dislike hunting elk with a bow, and I will no longer be doing it. However I may hunt deer during bow season. The other thing I realized is how much work we put in last year (somewhere around 50miles of hiking, with over 20miles worth of altitude gain/loss). The fact is that bow hunting elk is just way too much work for 1 animal (unless your hunting private land like they do on TV), and I plan on only hunting them with a rifle from now on.
Posted by StockHunter at 2:26 PM