Today I did +.55% during London hours, and had no trades for the rest of the day.

The reason I had no trades yesterday is because I was on a trip to Arizona and didn’t get back until about 7pm MST last night. I’m now back from my Arizona trip which was fun (except for the 12-14 hours [one-way] it takes to drive there). Didn’t do much other than go to church, and ate at a great restaurant called “Blue Adobe” (http://www.blueadobegrille.com/, I ate at the Mesa, AZ location) if you visit phoenix be sure to check the place out! The other thing I did was almost melt with the 90F+ temperatures, and the worst part was the air-conditioning in my truck isn’t working. Thankfully I’m back in the mountains now, though I already miss having family near by (I’m now the only person in my entire family [that I know of] that lives in Colorado). However my dad (and maybe my little bro) plans on coming up in July or August for hunting season.

I plan on going backpacking this weekend, and if I do I’ll be sure to post photos. I’m stuck between 2 places, both I’ve been too before. One place I went too for fishing and it was awesome (the fishing was the best I’ve ever had), but the other place I went into was only for a hunt and never got the chance to fish the lake though we bagged an elk and I found a sweet Native American scarper sitting on a rock (see photo below). Which one would you go for? Try the fishing at the place I hunted and look for more Native American trinkets, or go with the place I’ve fished before?

Here is a photo of the Native American scarper I found last year while we were hunting:

Totals for the day
Forex: (+.55%) Real Trades
All times on the charts are Mountain Standard Time 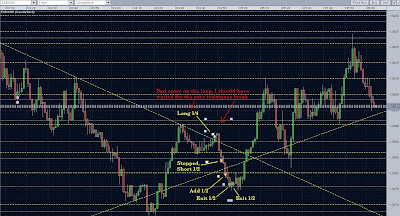 Great balance you have going with the backpacking/hunting next to the trading.

Hunting is all about waiting for ages for the prey to turn up and then pulling the trigger at the right time. So just like trading.

Thanks, hunting/fishing is my fav thing to do (along with trading) :D.