Went out elk hunting again yesterday (New Years Eve), and bagged another one. We left at about 4:30am and got there around 7am. We were driving down the road, and about 1/4 mile from the turn off where we shot the last elk, my dad spots a different herd of elk about 3/4 to 1 mile away. At this time it was about 7:30am, and he drops us off by the gate in the fencing next to the road. We hop the fence and start walking toward them in -13F, and it’s needless to say it was a little cold out. We got about 500 yards away, and I could see that it was a herd of about 15-20 cows and calves. Using the tree in front of us to block the elk’s view we get to about 300 yards away. I have my little brother set up to take the shot (he had the tag), and what seemed about 10mins later he finally takes a shot. It had looked like he missed, and the cows had surrounded the calves just standing there. So I told him to take another shot on the one to the left of the herd. He lets the round off and I see the bullet hit about 1-2 feet above the cow’s back and kick snow up about 5ft high. Now the elk really knew what was going on and took off, but stopped again about 400 yards away from us. So I had him take another shot, and he misses in the same way. Again the bullet was about 1-2 feet above the back, with snow shooting up 5ft in the air. The elk run again, and after awhile start to slow down so I decided to go after them. We start 1/2 jogging through knee deep snow and after 30 or so feet I look to my left and there is a calf coughing up blood. Apparently he had hit it with his 1st shot, but the calf never went down. So I had him put it down with a 250 yard shot. Even though it was a calf it was still a bit bigger than a full grown deer, so we went to work on it. After we get all done cleaning it, and drag it down the hill it was on and my finally pulls up on the snowmobile. After I get the elk tied up to the sled, my dad takes a photo with his cell phone: 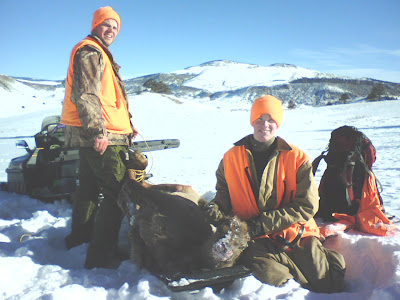 (I'm the one standing, and my little brother is the other one)

Once we haul out the elk and gear back to the car I take some photos: 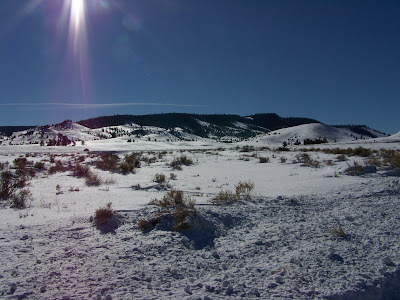 About 3/4 the way back home we look at the temperature gauge in the car and to our amazement it says 46F. Colorado has got to be one of the only places where you can go from -13F to 46F in the same day.

On a different note:
I updated the My General Trading Rules page with my #1 rule I forgot to put in :). A big thank you to ORIONMACHINE for reminding me about it in his latest video!
Posted by StockHunter at 10:33 AM