Packed in about 3-4miles, on our way in (about 1mile short of our 4-5mile goal) we heard an elk bugle (it was after sundown by then). So we decided to set camp up right there because the bugle was only about 1000 yards away. While we were eating dinner we could still hear them, but they were getting farther away. That was a good thing because we knew they were going to the lake that was above us. So the next day we sneaky up the trail and run into 4 bulls about 125 yards away, which sucked because my dad had a cow tag. So we froze due to the bulls looking at us. While standing there we spotted some cows to the left of the bulls, and they were only about 150 yards away. While my dad was setting up the cows were watching us, and the lead cow figured us out so she led the herd away from us up the mountain. They only trotted off, so we decided to follow them. Once we covered the 150yards my dad started saying “we are screwed, they took off”, but we kept going up hoping to run into them. While heading up I found a cool looking arrowhead (pics of it will be posted on a later day) from back when the Native Americans roamed around the area. Once we got to the top, my dad started throwing a huge fit because we have been hunting sense the beginning of my bow season (8-30-08) and hadn’t bagged anything. Stomping his feet and cussing like a sailor he storms off away from me about 30yards. Meanwhile I’m taking a leak, and right after I zip up a bull runs right in front of me (about 200-250yards). I signal to my dad, and for a split second he thought I was messing with him. He saw the serious look in my face, but then started to get bummed because it was yet another bull. About 2 seconds after he started to get bummed, he spotted 3 cows tailing the bull. So he gets down and uses a rock for a rest, fires on one of the cows and misses! So he chambers another round, and shoots again. The cow starts to run downhill we are thinking “crap he missed again”, but after about 2 steps the cow’s but drops. She then trips on a rock and falls down dead! Our reaction was indescribably happy. Once I got done with the processing (gutting and quartering [I deboned it after we got closer to camp]) we realized that he couldn’t have shot her any higher up the mountain! lol, needless to say that we are super tired today (packed the whole thing out about 5miles in 1 trip). Here are the pics of my dad, the elk, and the view from where we shot her: 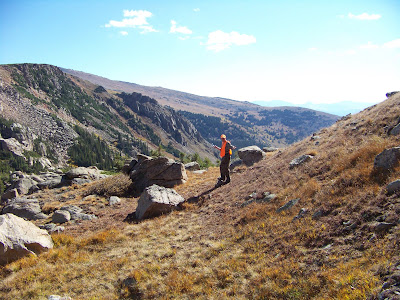 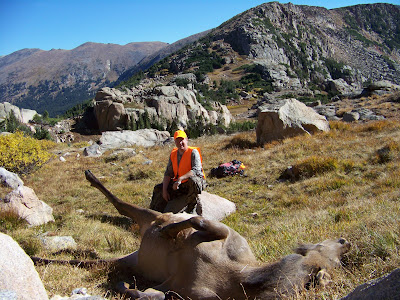 As far as trades today (10-1-08), I continued paper-trading and I’m too tired to post the charts :P. Results were: